Animals and Society: a Unique University Diploma Program in France

Émilie Dardenne, Associate Professor of English and member of the ACE research center at Rennes 2, has helped to create a specific program in animal studies. This is a unique program in France with teaching modules in various disciplines such as sociology, geography and others. It offers its students a Diplôme Universitaire (D.U) 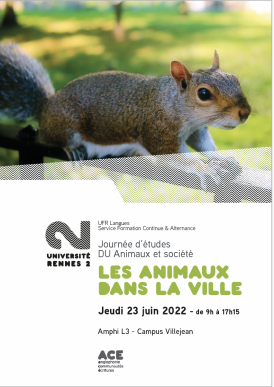 How did you come to focus on animal issues?

Having grown up near a slaughterhouse, I’ve been interested in the question of our relationship with other animals, and in particular the moral dimension of this relationship since my teenage years.

After completing my degree and as I started doing research for my master's, I began to focus on this topic by looking at the vegetarian movement in the UK. I did my doctorate on Frances Power Cobbe, a pioneering figure in British animal rights activism and feminism in the 19th century. I then became interested in the work of the philosopher Peter Singer, and finally I discovered the field of animal studies. It emerged at the end of the 20th century in North American academia, first in philosophy and anthropology and then in almost all the humanities and social sciences. I was fascinated by it and was very surprised that no similar program was being offered in France, especially since I noticed a growing interest from students. I started teaching animal studies in 2013 in the English Department of Rennes 2, and then I proposed, in partnership with Laurence Le Dû (Geography Department), a UEO (Unité d'Enseignement d'Ouverture) course on the place of animals in society. This course, which I now share with Véronique Van Tilbeurgh (Sociology Department), is always full, since we welcome more than 200 students each year. So, through this growing interest, we can see the need to explore and develop the field of animal studies in France, and related tools such as the book: Introduction aux études animales.

How did this university program “Animals and Society” come about?

In 2017, I saw a growth in demand for tools from primary and secondary school teachers who wanted to integrate the theme of animal issues in their curriculums. They requested ideas, strategies, entry points, and concepts. Inspired by the Inter-University Program on Gender Studies, we built a similar program specifically around the animal question with the Continuing Education Office of Rennes 2. It was launched in 2019-2020, and we received 40 applications for 20 available spots, confirming once again that the demand from professionals was there. It’s quite a unique training program in France to date. There is a master's program in Strasbourg on ethology, law and ethics of animal issues and several D.U.s in towards animal law or animal ethics, but the inclusion of the "animals and society" dimension, of the relationship between human groups and other animals, is a distinct specificity of Rennes 2.

Who is the main audience for this course?

The program tends to attract teachers, including those in higher education. Their numbers may grow due the enactment of a new 2021 law aimed at fighting animal abuse. It aims to increase "awareness of respect for companion animals" in moral and civic education. But the overall audience is made up of a much wider public: jurists, veterinarians, professionals of animal production, students, professionals working in culture, etc.

One can imagine that, in the years to come, if these questions remain, other similar programs will be offered in response to emerging professions. For example, one of the students of the first class of the D.U., Anne-Laure Meynckens, has created her own consulting company for communities and companies on animal issues: well-being, law, improvement of practices, etc.

We also get master's and PhD students who are looking to complement their own specialties, since animal studies crosses all disciplines. Furthermore, it's an opportunity to meet professionals in the field of animal protection who have both long-standing knowledge and field experience, so it is very valuable.

Finally, the D.U., which brings together people from different fields and backgrounds around this issue, is in itself an incubator of ideas and can help to create new future projects.

On June 23rd, you’re hosting a seminar on the theme of: Animals in the City. Can you tell us more about how you chose this theme and what is planned?

We wanted to close the course with an interdisciplinary day in order to continue to enrich our reflections, by inviting disciplines that are not necessarily represented in the course. After the notion of anthropomorphism in 2022, this year we’re interested in "animals in the city". I have noticed that there is a strong interest in this topic among municipal counsellors, notably during my work on a charter on the animal condition, requested by the city of Rennes (the city of Saint-Malo also recently contacted me to help with a similar project). This theme also involves organizations from many fields - pets, urban wildlife, biodiversity, etc. We will therefore have various presentations (by specialists in architecture, history, English-speaking cinema and biology) in order to better reveal the richness of this issue. We’ll listen to elected officials and leaders of organizations during a roundtable discussion. Finally, we’ll be welcoming a special guest from the cultural scene to help us close the day. It’s really quite an opportunity to gather those who have participated in this D.U. in the past, along with our most recent contributors and students, in order to facilitate discussion and possible future collaboration.