Rennes 2 Professor of American Literature, Claude Le Fustec, was one of a select number of scholars invited to travel to the U.S. as part of the Fulbright program, the Study of the U.S. Institutes (SUSIs) for Scholars over the summer. Throughout her trip she took part in seminars, lectures and discussions with American scholars as with other international participants. 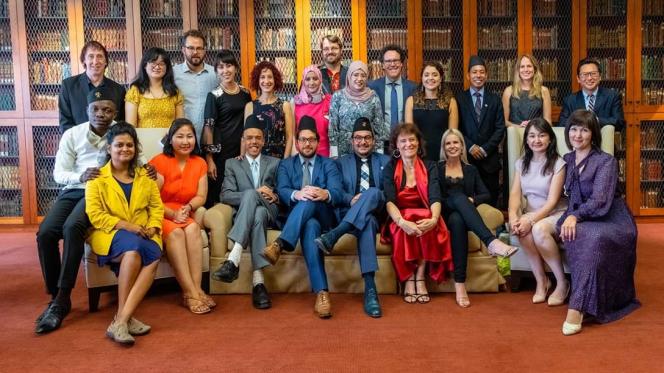 Rennes 2 Professor of American Literature, Claude Le Fustec, was chosen to take part in the Fulbright program, the Study of the U.S. Institutes (SUSIs) for Scholars and Secondary Educators for six weeks this past summer. The goal of the program is to strengthen curricula and enhance the quality of teaching about the United States in academic institutions abroad. Participants are post-graduate level academics who spend an academic residency at a host institution (this year’s host being Seattle University), and complete a study tour in various U.S. cities from the end of June through mid-August. Scholars are selected to participate in one of six Institutes:

Speaking of her experience, she said:

The Fulbright seminar in American literature took me to mythical shores, alternating working sessions on various aspects of American literature (and painting) since the Second World War and visits to places that have inspired these artistic representations. From Seattle University, the organizer of the trip, to Berkeley University, and to Georgetown University in Washington, D.C., our group of 17 participants, from Asia, South America, Europe and Africa, experienced a journey to the ends of the imagination: After three weeks in Seattle, the seminar took us in the footsteps of Marlowe and Oedipa Maas in Los Angeles, the Beats and the social unrest of the 1950s and 1960s in San Francisco and Berkeley, to Washington and its monuments and museums in memory of the difficult struggle for racial equality, before closing the loop in Seattle and its heavy Amerindian past. An intense experience of varied emotions, perfectly organized by a team of friendly and available staff. It was a real opportunity, which I wish to the greatest number of people!

While there, the scholars were asked to engage in seminars, lectures, and discussions with American scholars, meet with experts in respective disciplines, and visit civic institutions. Claude will help to bring this renewed appreciation and understanding of American literature and culture to Rennes 2 students as well as to the English Department overall. The connections made while abroad should also help to provide potential partnership opportunities with other universities as well as more research on the postsecular character of American culture.