Rennes 2 Professor of Art History Dr. Elvan Zabunyan is the Project Lead for the “Artists and Citizens” Program of the international project Echoes (European Colonial Heritage Modalities in Entangled Cities). She recently organized a two-day conference centered on questions related to contemporary art and colonial history in three specific cities: Bristol, Cape Town and Marseille. We spoke with her following the conference to get more information on this unique and interesting project and to see what’s next for their working group. 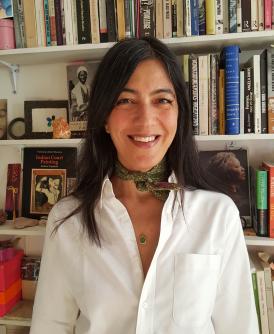 Echoes is a European research project that is leading the way on exploring sensitive issues related to the history of colonialism and its legacies within the framework of current heritage debates. At the heart of the matter, finding a way to change the way we see, discuss and explore certain elements of what is often considered as ‘traditional heritage’, specifically in terms of cultural artefacts, public art, museums, etc.  Instead of holding on to long-established patterns and ways of seeing things, the project explores how we might reshape the traditional narratives in favor of an approach which takes into account post-colonial understandings to foster new forms of progressive heritage practices.

Funded by the European Commission’s Horizon 2020 program, it draws on the expertise of leading international researchers and works with universities and other cultural partners in over 9 countries. Using a horizontal science diplomacy approach between cities and through the creation of new links and partnerships with artists, museums and civic groups, ECHOES seeks to foster new future-oriented forms of intercultural dialogues and representations. The program is split into 6 different work packages, ranging from: theory and methodology; Europeanizing colonial heritage; city museums and multiple colonial pasts; entangled cities; artists and citizens; and management coordination and impact.

Rennes 2’s Dr. Zabunyan is head of the project’s work package 5, entitled "Artists and Citizens", which focuses exclusively on artistic practices and the ways in which artists have considered colonial history and the urban context. Her group treats important questions on artistic works in cities, like, for example: What is the point of view that one occupies and what is the relationship to the symbol that one chooses to consider? What are the modalities of reception of an object, or an image or monument, particularly when considering the effects of the historical domination on populations with their own long and rich histories? What narratives can we draw from these works? And how has this informed our thinking?

The researchers in her group surveyed the artistic works in a number of cities, European and non-European. They ended up agreeing upon the final selection of Cape Town, Bristol and Marseille in which to conduct further research. When asked about the choice of these cities, she noted that there were many factors they took into account, like how each city has been influenced, since colonialism, by factors like slavery, immigration, the cultural experiences and interactions of the communities that have resided there, and the ongoing social dialogue and activism around similar questions. They held many open discussions and exchanges on each of these particular facets. In the end, they together agreed that:

“Marseille, Bristol and Cape Town are cities that each have their own culture, their own history, their own memory. Nevertheless, they are entangled and have unbreakable links to one another because of a past that was built for centuries on the colonial and slave experience.”

During this early period in 2016-2018, in which they more specifically detailed the project and surveyed cities for their field research, she and her colleagues, Associate Professor Nick Shepperd at Aarhus University, and Marine Schütz, Post-doctoral Fellow at Rennes 2, met with many young artists and historians who knew a great deal about the artwork and the contemporary local contexts. At the end of 2018, Associate Professor Shawn Sobers, UWE, Bristol, also became involved in the project as well as Dr Daniela Franca Joffe (2019) and Dr. Meghna Singh (2020), both post-doctoral fellows at Hull University and based in Cape Town.

Dr. Zabunyan noted that this was also around the time when the Black Lives Matter movement began picking up speed in some cities throughout the world. “Within the framework of ECHOES, the three parallel workshops were envisioned as moments of political creation questioning a history of slavery and a colonial history that intersect. One year after the death of George Floyd and the use of a renewed vocabulary carried by the demands of Black Lives Matter, which acts as a unifying symbol for all the struggles of people living in oppressed contexts”.

(Echoes Of Our Ancestors, by Christelle Pellecuer & Michael Jenkins. A film made specifically for Work Package 5 and produced entirely by ECHOES)

A particularly poignant moment for the group happened less than a year ago, when the statue of Edward Colston, a merchant from the 17th century involved in the Atlantic slave trade in Bristol, was removed. In the framework of ECHOES, having the city of Bristol in our work package, working on the colonial heritage and seeing the Edward Colston statue debunked could only confirm that the research we were engaged in was all the more relevant and that colonial heritage had to be questioned differently, by being part of a renewed history”.

This, and other similar discussions happening in communities of cities within and outside of Europe, has helped to continue to inspire the group’s interdisciplinary and pluridisciplinary research work.

“To critically question the ‘heritage’ and ‘legacies’ of colonial history often meant, and this was especially the case in the framework of our working group, to conduct research from below, that is to say, by appropriating new, improvised, and innovative tools, improvised, fluid, sometimes cobbled together, but it has allowed us to go beyond all the traditional ways of viewing heritage as was imposed by the colonial institution, by breaking, literally and figuratively, the verticality.”

While the pandemic context has forced the group to temporarily put on hold more scheduled visits to these cities, where they are planning on meeting with a greater number of artists and other community stakeholders, they are continuing to advance this important work via online conferences and workshops. They have also recently written a book which will soon be published by Routledge.

For more information on this project, please see their website here.