Priscilla Alves Peixoto is an Assistant Professor at the Federal University of Rio de Janeiro (UFRJ). She also collaborates with the graduate program in architecture (PROARQ-UFRJ) at the same university. 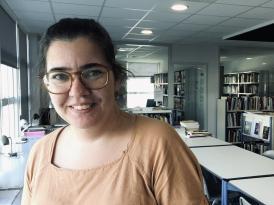 Priscilla Alves Peixoto's research focuses on the historiography of architectural criticism and urbanism. During her doctoral studies, her work focused on Françoise Choay, a French architectural and urban historian and theorist.

Françoise Choay visited Brazil only once, during the International Congress of Art Critics in September, 1959. The congress took place during a period of strong internationalization of the country and its intellectuals, and its objective was to debate the notion of synthesis of the arts.  It coincided with the construction of Brasilia and the amplification of the debate on architecture. The interest in art critics dedicated to architecture and the 1959 Congress was the starting point for the project that Priscilla Alves Peixoto proposed to the Scientific Interest Group (GIS) Archives de la critique d’art (ACA).

In advancing her research on the 1959 Congress, Priscilla Alves Peixoto chose to evoke different critics involved in the event (Mário Pedrosa, Mario Barata and Quirino Campofiorito), questioning the relationship between their critical fortunes and access to their personal archives. She then contacted the International Association of Art Critics, and as she was already following the work of Hélène Jannière, Professor of History of Contemporary Architecture at Rennes 2 University, and that of Antje Kramer-Mallordy, Director of the ACA and Lecturer in the History of Contemporary Art at Rennes 2, and she decided to apply for the International Chair in Humanities and Social Sciences.

During her time spent at Rennes 2, Priscilla Alves Peixoto greatly appreciated the opportunity to spend time on the archives. She was able to continue studying the organizational efforts of the 1959 Congress by situating the role of the French speakers. She was also able to study documents testifying to the impact of the military dictatorship in Brazil (1964-1985) on art critics. Her research led to a public conference entitled: "Archives, critique et politique. Notes pour une historiographie de la critique (non spécialisée) de l'architecture au Brésil" on April 7 at the Villejean campus.

Within the framework of the courses given at Rennes 2 University, she was also able to explore other facets of the approaches developed by Hélène Jannière and Antje Kramer-Mallordy, something she plans on sharing with her students in Brazil.

“Overall, it was a very positive stay, in terms of research and teaching as well as on a human level. I found the ACA team in Rennes to be wonderful. Their support prior to and during my visit touched me a lot."

The International Chair of Humanities and Social Sciences

The International Chair of Humanities and Social Sciences position is open to researchers from all countries and academic fields. Applications should be jointly submitted by one of the research units financed by Rennes 2. Candidates to this position should therefore contact either the head of one of these research centers, or one of our academics directly, in order to define the application project together.