Steve J. Haines, Professor of Jazz at the Miles Davis Jazz Studies Program at the University of North Carolina at Greensboro (UNCG), is currently International Chair at Rennes 2. During his visit, organized in partnership with the Conservatoire de Rennes and the Jazz à l'Etage Festival, he will be holding lectures, participating in conferences and giving concerts throughout the month of March. 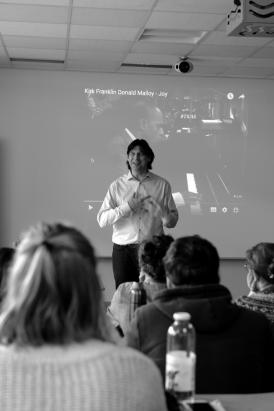 I believe this isn't your first time in Rennes, in fact you're now becoming a Rennes-regular. Could you tell me a bit about what first drew you here?

SH: Yes, well I'm delighted to be here. This story begins with a gentleman named Vincent Robineau. So, he showed up at my door at the university (UNCG). We have a small program housed in a very large music building. It’s the largest school of music in the southeastern US. We have over 800 music students, and yet we have this Miles Davis studies program which is very small, about 27 people. So out of 50-100 student applicants every year, we accept 6-7 students.

Vincent shows up at the door and he spoke to me in French and he said, “I come from Rennes and I’m here to learn how to play jazz”. I said, “well what do you play?” And he told me that he played guitar but that he didn't play very well. So, he started taking lessons with me and a guitar professor once a week. He later started performing every Thursday night at a jam session with the faculty for what we could call a baptism by fire. He immersed himself in the environment, and part of that was about him learning to listen to a huge selection of music. We had him listen to so many records.

That’s what we do in jazz as we learn, we listen to solos like Louis Armstrong, Miles Davis, etc. and then we learn them - every note and every single thing. Then we take what we love from it, and then we go on and we do another solo, and then another, and so on and so forth. That is our vocabulary.  That is how we learn to speak. When we go to perform, we're taking ideas from the masters that came before us and eventually we find our own voice.

So, every week, I told Vincent to learn a different solo and he practiced for hours, and now he's of course one of the most beautiful players. You should hear him, he's wonderful. As he was getting ready to go back to Rennes, he told me he wasn’t sure how to continue the momentum he’d built up through playing regularly with us. So, I told him, “Don't wait for someone to call you and don't expect others to make the scene. When you go home, you start the culture and you create the scene.”. So that’s what he did. He came back and he got one person to start playing with him, and then one more, until he eventually started a band, and then a big band all playing out of his basement. So he has been building this up and playing more and more. Eventually, he invited me to come here, where he set up a whole bunch of gigs for us. We performed and I also went to his place and went down to that little basement and sat down and conducted. We talked about where they were at musically and how to take their performance to the next level. In time, Vincent got some federal grants for his recording and then that's when I met some of the Rennes 2 University staff and faculty. I also went to the Conservatory and met Erwan Boivent, Professor at the Conservatory, and I gave some lessons there. Then I came back a couple of years later with faculty and students from UNCG.

So, since that first exchange, it’s been a continuing exchange between the two programs?

SH: At that point, there was a relationship that began with the Conservatory and Rennes 2. Erwan started some performance classes here at the university and they then invited us back. Since then, we’ve brought a number of students back and forth. In 2018, we also invited Erwan and Emanuel Parent, Rennes 2 Music Professor, to Greensboro. Emmanuel gave some lectures to our students and Erwan performed with 4 student musicians who came over with them. The Rennes students joined us at classes, and then we took our whole jazz program and our French friends and we drove to the Smithsonian (in Washington DC), and a few other places. After that, we brought everybody up to NYC and we performed. We went to visit Duke Ellington’s home and we did those musical types of things because we really felt that they needed to see the heartbeat of jazz - New York City.

Erwan, could you tell me about the relationship between the partners here in Rennes - Rennes 2, the Conservatory and the Jazz à l’Etage Festival?

Erwan Boivent: Yes, on this side we're really working to narrow the lines between the Conservatory and Rennes 2, so the students who went to Greensboro in 2018, and all the ones who left for the full year after, were students from the university but they were also following practical studies of jazz at the Conservatory. We’re trying to build this link on our side and, to some extent, that’s what we're doing with Steve. The relationship with UNCG is good for our transatlantic exchange of course, but it's actually strengthened the links on the local side between the Conservatory and Rennes 2 as well. Every time Steve comes back, we're just getting closer and closer.

The Conservatory, as a practical music school, has partnership agreements with both Jazz à l’Ouest and Jazz à l’Etage. This means that we welcome an artist for a master class each year - actually we're going to be welcoming Reggie Washington and another bassist for a master class next week. But, this year, our partnership with Jazz à l’Etage is different. Our friends from Greensboro were only free to come during this first week in March because of their spring break, so we knew we had to organize a trip around this period.  It all just worked out, which is great because now Jazz à l'Etage becomes a partner not just of the Conservatory, but also of Rennes 2 and UNCG. It’s an arrangement that’s really working well for everyone involved.

Steve, some cities are very well-known for their particular kind of music. You mentioned New York earlier as a sort of heartbeat of jazz, would you say then that NYC is the best representation of the jazz and jazz culture?

SH: Well, each one is so different. New York is a great example. With each city, I could tell you the names of musicians who have lived there and were making a living. There are pockets of musicians all over the world. Chad Eby, one of my colleagues at UNCG, has always said, “Thank god that all of the great musicians don't just live in New York, because otherwise the whole rest of the world would be a terrible place. Everything would just be in New York”.  There are beautiful musicians all over the world. And today, we have things like government-paid big bands in so many different places, which is just an example of how there are so many musicians able to make a living. Jazz at the Lincoln Center, is another example. They have a big band on salary and they have pensions.

So, there's tons of work out there it's just a matter of being strong enough, and all that really means is just persevering, just keep doing it. It's not just as simple as saying who is the most talented. Talent is how hard you work, and the person who perseveres the longest is the one who succeeds.

Regarding your upcoming lecture “The Importance of Listening”, could you talk about becoming a more active listener (even for someone who is a non or amateur musician)? And could you also tell us a bit about the lecture you’ll be giving called “Soul Crushing Pedagogy in Jazz Education”.

SH: The questions are somewhat connected. Remember that I was explaining how musicians learn: we listen and we imitate. I have a 3-year-old daughter and she doesn't learn how to speak from a textbook. She can't read, she just listens and she imitates and that's how she learns a language. Her brain figures it out. In jazz education these days, the actual music has been replaced with textbooks and secondary / tertiary sources telling people what to do rather than encouraging learning from the music itself. They say what works and what doesn’t work. The problem with that is that if the textbook is telling everybody how to play, everybody is going to sound the same. That’s the reason I say soul crushing, because that type of pedagogy is why people quit playing music. They're no longer themselves. Jazz music is sort of a folk music.  It was invented with many different wonderful and messy and ugly influences. So, when you give students textbooks and you say, this is how you play, this scale over this chord, the problem with that is that nobody thinks about a scale when they play. Not really. Ella Fitzgerald when she was singing, she wasn't thinking about the scale or the nerdy stuff when she was singing. She was just singing. So, in the same way, when you speak, you don't think of a subject and a predicate, your brain just figures it out. Of course, as teachers, we have things that we can do to help guide people, but the music should be our basis, not other distractions.

So is that what you mean when you say that it's not about being talented, but it's about working hard. Working starts by listening?

Yes, of course. So, let's take Maya Angelou, who was at UNCG before she died and she spoke to our students. Well, this is a woman who had written countless novels and poems - one of the world's great writers. Maya Angelou probably read over 10,000 – 20,000 books in her lifetime. She knew every author; she'd read every poet. If someone had said to her: “The world is too much with us, late and soon, getting and spending, we lay waste our powers…”. She’d say: “Wordsworth”. It would have just been immediate to her because she knew.

Someone like DaVinci also knew every artist and every student of every artist in Europe, which must have been pretty hard to do when he was living, but he knew everybody. He knew what they were working on and why they were working on it. It's important to know to listen, to observe. A doctor will listen and learn everything possible so that they can treat the body. A lawyer will learn case law so when they're before a judge they can counter opposing arguments. You have to know the precedent, the history. So, for us jazz musicians, our history is steeped in these masters of music and so that's what we have to know.