Interview with Oscar Quintero, Chair of the Americas

Professor at the Universidad Nacional de Colombia (National University of Colombia), Oscar Quintero recently held the position of the Chair of the Americas at Rennes 2 University and participated in a conference on transamerican studies. 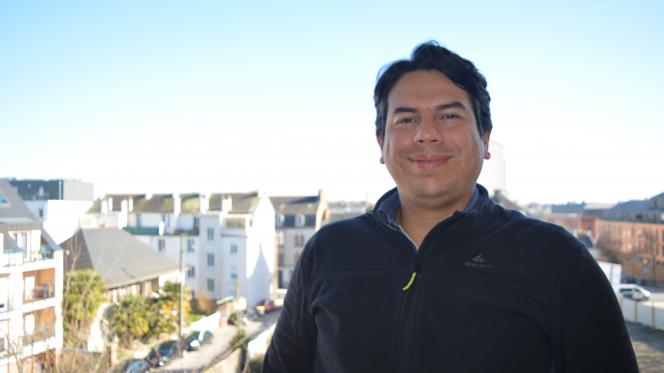 His research focuses on the processes of construction and (re)production of social inequalities, particularly in the educational environment, from an intersectional perspective of systems of social domination such as class, gender and ethnicity, among others. His work also includes examining social movements, mainly ethnic and student movements, as well as strategies, both individual and collective, to address social inequalities and power asymmetries in Latin America.

Can you tell us a bit about what brought you to Rennes 2?

As Chair of the Americas, I was invited by the scientific interest group Institut des Ameriques (GIS: IDA-Rennes) and Rennes 2 to participate in the special activities taking place around the 15th anniversary of the creation of the Chair position. It also happens to be the 15th anniversary of my first visit to France. I attended school here at Rennes 2, first completing my Master 2 research program in social geography at the Espaces et Societés (ESO n°6590) research centre before completing my PhD. It’s a pleasure to return and share what I’ve learned with the students today.

Since here, I have participated in seminars, like the IDA Conference and others, including one on feminism in Latin America that was organized by Nathalie Ludec of the research team Mémoires, Identités, Territoires (ERIMIT). The topic of gender in higher education is another aspect of my research and I serve as Secretary of the Observatory of Gender Affairs at the Universidad Nacional de Colombia. I have also given some courses in social geography to Rennes 2 students, in French and Spanish, and I’m happy to say they were well-received.

There is a certain gap between the discourse and the reality and practice of multiculturalism. My presentation dealt with the continuity in social inequalities that continue to disproportionately affect ethnic minorities, particularly the indigenous and Afro-Colombian communities.

As part of the anniversary of the Chair position, you participated in the Conference on Transamerican Studies. Could you please tell us about the conference, your presentation and how it went?

Yes, it was a very interesting conference, organised by Professor Jimena Obregón, President of the GIS:IDA-Rennes. It was nice to be able to contribute and exchange with the different teacher-researchers who attended, many of whom had previously held the Chair of the Americas position. Although we were each from different countries, we were able to discuss themes that were common to us all: literature, history, sociology, architecture, etc.  This plurality of topics and viewpoints with regards to the Americas was very enriching. The Chair program is an initiative that is really qualitative and very important in France, and very healthy for the Americas. It is a space that lends itself to meetings, exchanges, knowledge, and I hope that it will continue.

The subject of my presentation was on the current challenges of multiculturalism in Latin America, looking at the case of Colombia in particular: social inequalities, intersectionalities and affirmative action. In the 1980s and 90s, there was a shift in the way multiculturalism was framed in Colombia as well as in other places in Latin America. Governments began to implement policies that encouraged the concept of multiculturalism. At the time, it was linked to the democratic dream, the promise of the 1980s, just after the fall of dictatorships in many countries in the region, and the measures were seen as part of a new progressive and innovative outlook.

And while this sounds like a promising initiative, it’s not as obvious as it sounds to put into practice. There is a certain gap between the discourse and the reality and practice of multiculturalism. My presentation dealt with the continuity in social inequalities that continue to disproportionately affect ethnic minorities, particularly the indigenous and Afro-Colombian communities.

And you have also worked on the issue of social inequalities within the context of higher education. When looking at the educational landscape in Colombia today, are there real changes that can be seen?

Well, access to education for ethnic minorities was prohibited by law during the colonial era. In the current Republican era, there are no explicitly racist or discriminatory policies, however, access for minorities remains very limited in practice. Part of the policy changes that have happened in the last 30 years or so include measures promoting positive discrimination. Yet my studies have shown that they do not work very well. It really takes political, economic, administrative and other sorts of investment to achieve multiculturalism in education and other domains. And the reality is that because many structural inequalities have not been addressed, a good many students from the indigenous and Afro-Colombian communities are unable to access the higher levels of education.

In addition to these structural inequalities, there is also an element of everyday racism that complicates matters for people from these ethnic groups. My thesis entailed a comparative study on racism* as experienced by black students in France and Colombia alike (Paris and Bogota). It dealt with identifying moments of “everyday racism” that students face in the two countries. I was influenced by the work of a researcher from the Netherlands of Surinamese origin, Philomena Essed, who precisely proposed the concept of “everyday racism”. This type of racism is not an easily identifiable and explicit type of racism. It is not the type of racism where people yell insults, or become physically violent, although this can happen. Overall, it is more similar to a hidden racism, based on stereotypes and presumptions. During my research work, I found this type of racism to be very present in universities in both countries. Between the social inequalities that accumulate and the casual everyday kind of racism that is confronted, many minority students are still disproportionately disadvantaged.

And what were some of the main differences between “everyday racism” for students in France and Colombia?

What surprised me was that there are many similarities and, at the same time, many differences. Stereotypes towards the black populations in both places are a bit of the same. From a stereotypical point of view, the place of black students in universities is often questioned, based on perceptions of their supposed intellectual inferiority.

In terms of differences, one thing that was striking is that, in France, there tends to be more of an emphasis on denying a student’s ‘Frenchness’ if they are black. That is to say, people were more likely to presume that black students studying in France were not really French, but foreigners, foreign students. However, the interviews that I conducted during this period were with black students who held French nationality. So it's interesting because it's a kind of radical otherness. It seems to point to a particular stereotype that ‘a Frenchman can't be a black man’. There are other differences, but this one was quite important.

What also stood out in my work for the case of Colombia, and I think it is an unintended consequence of multiculturalism, is that there is more of a tendency for people to build opinions based on a kind of otherness for black students that stem from cultural ‘exoticization’. For example, black students often face perceptions from other groups who assume that, because they are black, they must be great dancers, or that they must be very nice, or joyful, and so on. Basically, they are being classified into another kind of stereotype, and it’s definitely a poor way to understand multiculturalism.

One new proposed measure by the French government that seems likely to impact diversity in higher education in France is the proposal to increase tuition fees for international students from outside of the European Union. What impact do you think this is likely to have on diversity in general and for Colombian students in particular?

I think this proposed change is really unfortunate, and it’s likely to greatly limit the ability of foreign students from economically poorer backgrounds from studying in France. Personally, I didn't really have the means to come to France fifteen years ago, and I was able to study thanks to the help of the French government. There are advantages, benefits to consider which are not really economic in nature but that are much more important than economic profit. Because I was able to study here, I’m now a professor who is able to speak French, participate in collaborative French-Latin American projects, and help to build more meaningful partnerships between Latin American and French institutions.

Are you planning any future projects that have culminated from your time spent here in the last month?

Yes, as a result of these types of fruitful exchanges and collaborations, Rennes 2 has just signed an agreement with the Universidad Nacional de Colombia, coordinated by Professor Vincent Gouëset of the ESO research centre. As part of this agreement, we envisage establishing an international joint thesis co-supervision program. It is a subject that is very interesting to me personally given my own trajectory as a former Rennes 2 student and given the large number of Colombian students at Rennes 2 (particularly at the CIREFE).

I’m also planning to participate in a project to publish a memoir of sorts of some of the various topics that were presented during the Conference on Transamerican Studies.

In the same vein, I’m thinking of starting a research project related to the type of measures that government is trying to introduce in France (on tuition fees). How this type of reform can really limit access, or limit diversity in French universities. Obviously, I think it’s very important to study inequalities, but it would be interesting to frame this new proposed measure in terms of what it might mean for diversity, inclusion and exclusion of some nationalities.

* Oscar Quintero’s thesis was undertaken with the co-supervision of Rennes 2 Professor Vincent Gouëset and Researcher Elisabeh Cunin of the French National Research Institute for Development (IRD). The complete document is available here.