Moovency, the creation and success story of a Rennes 2 startup company

In January 2019, Moovency, the startup from Rennes 2 University, was one of 4,400 exhibitors at the Consumer Electronics Show (CES) in Las Vegas 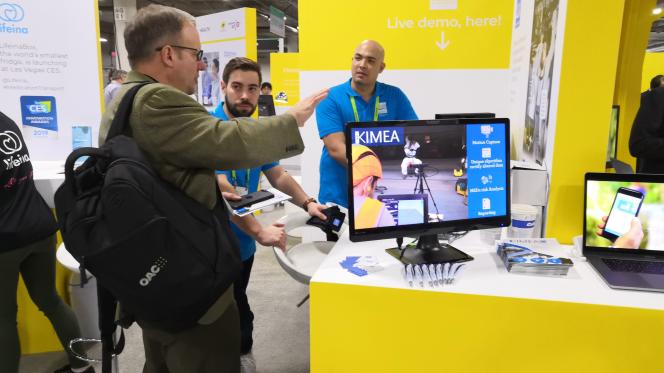 Winner of the 2018 edition of the French IOT competition organized by La Poste, Rennes-based company Moovency earned a place at the CES in Las Vegas in January 2019. The CES is a key event in technological innovation in electronics which attracts more than 180,000 visitors from 160 countries each year. For Moovency, it was a unique opportunity to introduce Kiméa, its software solution to help ergonomists detect the risks of musculoskeletal disorders at work (tendonitis, carpal tunnel syndrome, back pain...).

"Our presence at the CES allowed us to meet people we would never have been able to approach otherwise, such as the CEO of Total or the Director of R&D at L'Oréal... We were able to exchange with other startups and find partnerships," says Franck Multon, Professor at Rennes 2 University and Co-founder of Moovency with Pierre Plantard, CTO of the startup, and François Morin, CEO.

Launched in November 2018, Kiméa, - for Kinematic Measurement for Ergonomics Assesment - uses Kinect (a device initially designed for video games to control an interface based on body movements) to measure data on poor posture at work. "It is not a question of replacing the ergonomist, but of assisting him. The ergonomist remains in control of the decision," explains Franck Multon. Kimea's originality is to have developed algorithms capable of correcting data and making them viable in an industrial environment. "The software measures the actions of an operator in his working environment using a depth camera. No need for sensors or specific equipment to capture motion.... "as long as the person remains in the field!" said the teacher-researcher.

The software is the result of several years of research begun by Pierre Plantard in 2013 as part of a CIFRE thesis involving the Mouvement Sport et Santé (M2S) research centre at Rennes 2 University and Faurecia, the automotive equipment manufacturer. "Faurecia wanted to improve its ergonomic risk rating tool and standardize the measurement, so that the ergonomist could focus on data analysis," says Franck Multon, who directed the thesis. Pierre Plantard's results allow him to publish five articles in international scientific journals. Faurecia Monde, convinced by the benefits of the solution, decided to take it further: by creating a startup to market Kiméa. The transition took place at the end of the thesis period, in 2016, with the support of SATT Ouest Valorisation, and the support of Faurecia. "Rennes 2 University also helped enormously by hosting us at the PNRV during the maturation period," Franck Multon points out.

Moovency was officially created in November 2008. The company signed with SVA Jean Rozé, its first client, a month later. His participation in the CES gave him a boost: "This led us to review our business model... We were targeting the French market, but Korea, Japan, China, the United States and Canada have also shown interest, as well as other countries in Europe, South America and North Africa. Now we're thinking bigger and we're probably going to tackle international markets."