Opening ceremony of the Mario Soares Chair at Rennes 2 University

Rennes 2 University inaugurated the Mario Soares Chair on December 14, 2021 as part of the cooperation agreement with the Camoes Institute. The signing of the accord aims to strengthen scientific and cultural collaboration with Portugal and Portuguese-speaking countries. 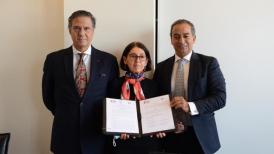 Rennes University was the first of the provincial universities to begin teaching Portuguese and issued its first certificate in Portuguese in 1936.

The formalization of the creation of this 5th Mario Soares Chair in France will make it possible for further developments in the fields of research in history, culture, language and Portuguese-language Literature. In addition to Portugal, the University's department opened up, more than half a century ago, to studies on Brazil and, 30 years ago, to African countries with the Portuguese language. This last field of research has given rise to numerous publications and has allowed the constitution of an important research library on Portuguese-speaking Africa. The Bernardino Chiche collection, now part the Central Library of Rennes 2, has more than three thousand specialized works and is one of the richest collections in France in this field.

Augusto Santos Silva, Portugal's Minister of Foreign Affairs, welcomed the initiative to strengthen scientific and cultural collaboration and stated that this 5th chair in France and the 60th Camoes chair in the world will consolidate a network of academic relations and scientific research.

The research topics of the Mario Soares Chair will be :