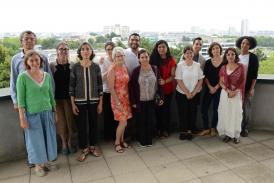 Faculty members from the Department of Modern Languages of the University Centre for Social and Human Sciences of the Universidad de Guadalajara were welcomed earlier this week to discuss the possibilities of establishing a joint Master’s program with Rennes 2’s program on Francophonie, Plurilingualism and Intercultural Mediation (FPMI). The program would cover subjects related to: philology, literature, linguistics, translation and didactics.

The Department of Modern Languages of the University Centre for Social and Human Sciences has already opened a bi-diploma program with the Herder Institute of the University of Leipzig, with the support of DAAD and CONACyT (the Mexican National Council of Science and Technology).

Discussions throughout the day were led by Amal Jouffe - El Amrani, Director of the International Office at Rennes 2 and centered on the complementary aspects of the two Master’s programs and the different modules that could be offered within the framework of a possible agreement between the universities. The group also met with Philippe Blanchet, President of Rennes 2 Academic Council and Head of the FPMI program, as well as Lesley Lelourec, Vice President for Internationalization, before concluding with a tour of the campus' digital centre, the Pôle Numérique Rennes Villejean (PNRV), led by Frédéric Remonté, Digital and Multimedia Engineer.

For more information please contact the International Office at Rennes 2 at: international [at] univ-rennes2.fr