Rennes 2 Strengthens its links with Ireland

Alongside three other Breton universities, Rennes 2 signed a Memorandum of Understanding in August 2021 with the three "Atlantic" Irish universities with the aim of strengthening, post-Brexit, an already fruitful academic cooperation. 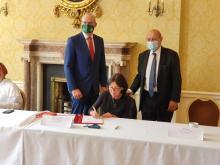 In the post-Brexit context, the various signatories intend to deepen their relationship through the emergence of common research projects, support for the mobility of teachers, staff and students, and the outline of common programs that could lead to a double-degree. Emerging priority themes include: agriculture and nutrition, sea and coastline, digital and cyber security, health, environment and sustainable development as well as Celtic languages, histories and cultures. The partners will continue their discussions in the coming months with the aim of setting up concrete actions, such as the organization of summer schools, common research projects and the deepening of links with twinned cities.

Supported by the Region of Brittany and signed in the presence of the two Ministers of Foreign Affairs, Jean-Yves le Drian and Simon Coveney, the agreement is planned for a period of 5 years. At the end of this timeline, the agreement may be extended, or even increased, to ensure the continued mutual influence of these Celtic academic communities.