Our University was delighted to recently welcome Mr. Geraldo Nunes, Professor of International Relations at the Federal University of Rio de Janeiro, Brazil for a series of lectures and research workshops  on our campus last week. 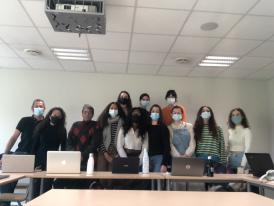 On November 18th and 19th, Rennes 2 students of the Master's ALPI program were invited to take part in a special set of lectures and events with Guest Professor Geraldo Nunes of the Federal University of Rio de Janeiro (UFRJ).  As well as being a professor specializing in Brazilian history, he also created the International Relations Office of the UFRJ and served as Vice-President of International Relations of the University for over 20 years. Professor Nunes  also collaborates with the ERIMIT research centre regularly.

The UFRJ is the largest federal university in Brazil and is one of the Brazilian centers of excellence in teaching and research. They have been an international partner of Rennes 2's for over 10 years, with Professor Nunez making several trips to our campuses for lecture series and collaborative research work on numerous occasions.

During his visit, he held discussions on several important themes in an effort to help our students better understand the political and economic situation in Brazil today. The lectures and conferences organized for the occasion included: