The President from partner University College Cork was invited to Rennes to take part in the European Cyber Week and spent time with Rennes 2 faculty and staff to discuss a number of projects. 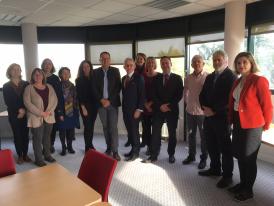 The President of University College Cork (UCC) recently visited Rennes 2, after delivering the keynote address of the European Cyber Week conference, held from November 19th - 21st, at the Jacobin Convent in downtown Rennes.

While here, they were able to meet with Rennes 2 President, Olivier David, Vice President of Internationalisation, Lesley Lelourec, and Vice President Christine Rivalan Guego, as well as several other staff members.

The group from UCC included:

Discussions centered around increasing collaboration in several academic fields, notably with regard to the Creative Arts in Public Space (CAPS) graduate school, and a new European project on landscapes in distant regions / outposts. The delegation was particularly enthusiastic to learn more about the Epicerie Solidaire, a free grocery store created by a Rennes 2 student initiative, and to discover the ancient Irish texts in the University library.

University of Rennes (UNIR) members also hope to build a strategic partnership with UCC following a visit to Cork by Rennes 2 staff in February. Cork is also a sister-city of Rennes since 1982.

The International Office at Rennes 2