Rubén Pujante Corbalán has received the Gerardo Diego International Prize for Literary Research, for his thesis on the work of the Spanish poet Antonio Gamoneda, jointly supervised between Rennes 2 University and the University of Murcia. 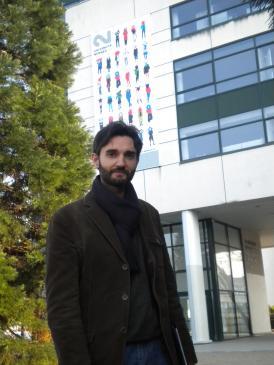 Rubén Pujante Corbalán at Rennes 2 University, in 2018, during his doctoral studies.

Organized by the Gerardo Diego Foundation since 2001, in collaboration with the Ministry of Culture of the Government of Cantabria and the City Council of Santander, the Gerardo Diego International Prize for Literary Research awards unpublished essays on topics related to Spanish poetry of the 20th and 21st centuries. "This prize is a tribute to the poet Gerardo Diego and his work as a theorist and critic of poetry," explains the Foundation. In June 2021, it was awarded to Rubén Pujante Corbalán, former doctoral student and teacher at Rennes 2 University.

"Even though I had obtained my doctorate with honors cum laude, I really didn't expect to win this award," he commented. "I was very surprised when I got the call from the jury president to tell me the news. Then there was the editorial work that resulted in a beautiful publication, as required by the rules of the award. The book will be presented on June 21, 2022 in Madrid, in a beautiful and very symbolic place: the famous Residencia de Estudiantes, where Lorca, Dalí, Buñuel ... met. It is a true cathedral of poetry and culture". The book was co-published by the Foundation and the publishing house Pre-Textos.

After studying Spanish language at the University of Murcia (Spain), Rubén Pujante Corbalán continued his work on the Spanish poet Antonio Gamoneda in a doctoral thesis in cotutelle between the Rennes 2 University and the University of Murcia, under the supervision of Christine Rivalan Guégo and Vicente Cervera Salinas. His first exposure to Gamoneda's research and poetry was at Rennes 2 University, during his Erasmus year, when he was studying the Master 2 ETILA (Iberian and Latin American Studies).

In France, he worked as a teacher in higher education for six years. Between 2012 and 2016 he taught Spanish to French students as a lecturer at Rennes 2 University; and between 2017 and 2019 he taught Spanish at the University of Bretagne-Sud (Lorient). He is currently living in Spain again, where he is working for the International University of La Rioja (UNIR) in the field of distance learning.

His doctoral thesis focuses on the less explored aspects of the work of the Spanish poet Antonio Gamoneda in the latter stages of his writings, a period whose structure would have its own meaning, clearly differentiated from his other creative periods. This thesis, defended in Murcia in November 2020, is the basis of the work presented to the Gerardo Diego Literary Research Award. Under the title: Vértigo y luz. Sublimidad y sinestesia en el ciclo de senectud de Antonio Gamoneda, it focuses on the conception of Gamonedian poetry as "music of the memory", which would correspond to the rhythmic nature of its ideas and images, especially the categorical analysis of the sublime feeling and the sensory transpositions or synesthesia, two characteristics between which there would be aesthetic overlaps.