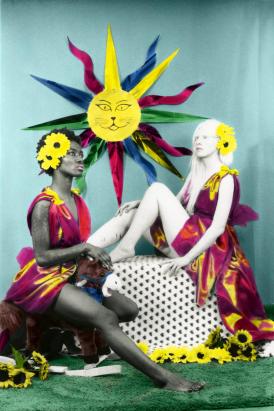 "Tarot Trans" is a photographic project by Chilean artist Zaida González Ríos that appropriates the 22 major arcana of the Tarot by replacing the figures on the cards with non-standardized models, such as transgender people, migrants, disabled people, elderly people and others who correspond to the meaning of the assigned card.

Currently in Chile, many minority groups are organizing and demonstrating for their rights to be respected, for social inclusion and for an end to discrimination. In Chile, LGBTQIA+ groups and migrants in particular, have been victims of repeated abuses, homicides and intentional feminicides.

The relationship that is created between the tarot and these groups of people, through the medium itself, must implicitly serve to break down the masks. This deck of cards is consulted by many people from all socio-cultural backgrounds. Benefiting from a massive and popular diffusion, it is therefore a very visible medium and one that one can easily identify with. It is built on the union of language and vision. The tarot is also one of the main magical traditions of the West, it conveys a rich iconography and many interesting symbols to contextualize in a non-normative representation.

Each card has extracted a set of identifying values for reflection that manifests itself through concepts such as: freedom, independence, power, creation, authority, wisdom, vindication, love, struggle, transcendence, victory and healing, among others.

Opening on Wednesday, January 18 from 1 pm in the presence of the artist.

An exhibition presented as part of the 34th edition of the Travelling Festival, which continues its explorations in Chilean cinematographic lands this year.

Reserved for students and staff members of the University Rennes 2.

A workshop given by Zaida González Ríos is proposed in connection with this exhibition on January 18. To know more about it.

In January, the cultural season of Rennes 2 honors the LGBTQIA+ culture.

In this context, several events are proposed on the Villejean campus in partnership with the University's Equality Mission: