Professor Anne Mévellec is a specialist in urban politics and public policy at the School of Political Studies at the University of Ottawa and is also a member of the research center ARENES. During her stay at Rennes 2 as part of the International Chair of of the Humanities and Social Sciences program, she worked closely with Sébastien Ségas, Assistant Director of ARENES and Rennes 2 Teacher-Researcher, for the development of a collaborative online course on the sociology of locally-elected officials. 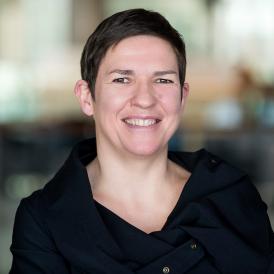 What motivated you to come as a Chair at Rennes 2?

Well, I have a close working relationship with researchers from Rennes, and specifically from the ARENES research center. Even though I’ve been living and working in Canada for some time now, Rennes 2 is actually my alma mater. I did the equivalent of my bachelor’s degree in history and social sciences here, before doing my master's at Rennes 1, and then PhD under the co-supervision of Rennes 1 and the University of Québec at Chicoutimi. I was also a lecturer at Rennes 2, so I have quite a few close links with the University, particularly within the AES Department and the Social Sciences Faculty.

I began working with Sébastien Ségas on different collaborative projects a few years ago and it’s helped to bring our two institutions closer together. I have research topics that are quite similar to those of Sébastien. We’ve been able to organize workshops together and he also came to Canada for a colloquium. We’re now working on creating a new project together. We’ve been building a kind of exchange in social sciences between Ottawa and Rennes, to see how we could take this cooperation even further and he’s been great to work with. At their core, institutions are made up of people. In order to create a strong link between two institutions, you really need to start by encouraging their people to exchange and collaborate on a regular basis.

Were you able to participate in or hold any seminars or classes while here?

I ended up giving two seminars. One was conceived for doctoral students and some masters students of ARENES. I spoke about career paths in the academic world and research work in Canada. What are some of the research opportunities for French students? How does one go about finding a Canadian research internship? What are the distinguishing elements of the Canadian research world that should be taken into account when thinking of building a career in this country? The Canadian system has an approach, a way of thinking about research, that’s a bit different from the French system. It’s closer to the American system, so it’s helpful for students to know about it and understand these differences early on. For example, in Canada, academics seeking to undertake any research project must first obtain an ethics approval from their university. Before being able to interview people or before going into the field, I have to be able to explain to the university why I want to do it. How can I do it? What are the risks and benefits for each person? We must be able to show that we have thought about all these issues well in advance. This is not to say that the French don't think about it, but in our case, the procedure is more formalized. It was a topic that was quite interesting to the students and it was nice to be able to get them thinking about this.

I also gave a seminar on my research work which relates to the third axis of the ARENES research group, which is co-directed by Sébastien Ségas. I presented on the governance of the national capital, Ottawa, and the question of transportation. The seminar was titled, “Metropolitan Governance in Canada's National Capital Region: Transportation as a Source of Institutional Capacity?”. In my research, I propose an analysis of the Ottawa-Gatineau metropolitan region, with its original territorial and governmental configuration. The region is crossed by an "internal" border that separates two provinces (Ontario and Quebec) and their respective cities (Ottawa and Gatineau), to which is added the fact that Ottawa is also the federal capital of Canada. In this context, my work seeks to better understand the manifestations and issues of metropolitan governance and, in particular, the question of interprovincial links and sustainable mobility with an emphasis on the perspective of public transit supply. So, I presented the research project, the preliminary results, and we were able to have a good discussion afterwards with the colleagues who were present.

Could you tell us about the project that you are looking to develop with Sébastien Ségas?

What we would like to do is to set up a small course that we would like to share for Master 1 students. It would really be like a half course because it would be 12 hours on the sociology of locally-elected officials. The idea is to have French and Canadian students working on a common subject and see how this subject is applied in two different realities. We’re looking to provide students with the opportunity to exchange ideas. For example, if we talk about women in municipal politics, what is the situation in France? What is the situation in Canada? What are the similarities and the differences? We can think of all sorts of topics like that, which could very well be the subject of a comparison. This is a great pedagogical tool as this comparison forces each student to see and make explicit all the unspoken aspects of their own culture, of their context.

So, the idea is to start with a small project, but even small projects take some planning and work. Which students do we recruit? How does one have the project recognized? In reality, it requires a lot of forethought and work. The good news is that, thanks in a large part to the time I spent at Rennes 2, we now also have the support of the Vice President for Internationalization, Lesley Lelourec. We can advance knowing that we’ll have assistance from the Service Universitaire de Pédagogie (the pedagogical support office) of Rennes 2, including the support of an educational engineer. Fortunately, this kind of program is something Rennes 2 is looking to increase as it is within their mandate of “internationalization at home”. In Ottawa, we're in the same situation, especially after two years of the pandemic, we want to provide our students with more opportunities to exchange and not just through traditional physical mobilities, although it may prompt more of these as well. At the master’s level, it's important to open oneself to these topics, academically speaking, and by choosing a formula based on a limited course of 12 hours, it avoids overwhelming students who might not otherwise consider themselves interested in international studies. The University of Ottawa has an initial mandate to serve the Franco-Ontarian community, that is, the Francophones of Ontario. So, for me, it’s also important to offer opportunities or openings to my students to other francophone spaces under friendly and benevolent conditions.

Did you have the opportunity to discuss other subjects with Rennes 2 teacher-researchers?

I didn't arrive in a very favorable period for exchanges since it was just after exams and everyone was busy correcting. Plus, I was mainly there to discuss ongoing collaborations with the people I know. I got up to speed on some of the latest research of my Rennes 2 colleagues in ARENES and the AES Department. Essentially, it provided me with the opportunity to continue to work with them, with Sébastien in particular, and develop and improve our strategy. But I did get the chance to meet a few new people who happen to have some research topics in common with me. For example, I’m working on forest governance in Canada at the moment. I met the current Rennes 2 Director of the Social Sciences Faculty, Johan Oszwald, because I happened to be working from that building for some time during my stay. He’s a geographer who also works on forest governance. So we exchanged a little bit on that. But that's the beauty of the informal nature of these interactions. I didn’t set out to find forestry specialists in Rennes, but through this chance meeting, I’ve learned about forestry networks that I wasn’t aware of. This can be really useful going forward.