The Inter-University Degree on Gender Studies Celebrates its 10th Anniversary

Fanny Bugnon, a Lecturer in Contemporary History at Rennes 2 University, is in charge of the Inter-University Digital Degree on Gender Studies. In anticipation of its Summer Academy, to be held on June 24th on the Villejean campus, she tells us how this innovative program was created and is attracting more applicants every year. 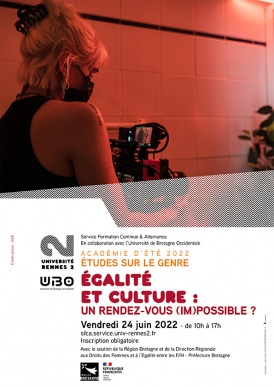 How did you first get into the field of gender studies? When you were a student, did you identify as a feminist?

F.B. I was a feminist long before being a student! However, I had no intention of linking feminism to my studies. It just happened that in the late 1990s, while I was a student at the Sorbonne, and an optional course entitled "Women and Work" was offered. I liked it very much, so much so that I decided to integrate this field of study into the rest of my university curriculum: I am a historian and my master's thesis was on the themes of feminism and antifeminism. I had an interest in the subject and I was lucky enough to come across it at university. I later did my doctoral thesis at the University of Angers, under the direction of Christine Bard, before being recruited as a research engineer on research contracts from 2005 at Rennes 2 University. When the Inter-University Degree on Gender Studies project was being created, I became involved from the outset.

Could you please tell us how this course came to be developed?

The program is distance-learning based, and opened in 2012, but it had been in preparation since 2008, thanks to a European call for projects involving the region of Brittany. My predecessor, Annie Junter, a jurist who held a position dedicated to feminist and women's studies - one of the first positions created in 1985 in universities at the initiative of Yvette Roudy and Jean-Pierre Chevènement -, and Arlette Gautier, a sociologist and demographer at the University of Western Brittany (UBO), seized this opportunity to imagine a new course program. For several years, the need for such a program concerning equality issues had been identified at the regional level through requests from people working in the nonprofit sector and in local collectivites - people who were confronted with questions relating to gender issues in their work, but who had no formal training on the matter. This group of people also had strong time and mobility constraints that made it near impossible for them to resume their studies in a traditional student format. The digital campus of Brittany was set up at around that time and offered a way to get around these kinds of specific difficulties. So, the reliance on digital technology emerged as a  solution, which allowed us to cater to the needs of these new potential students.

The program is celebrating its tenth year of existence. Who is the target audience today? How has it evolved?

What has changed is the number of people who are interested in the course and who apply. We offer 20 spots (and not more than that since our aim is to provide individualized support to trainees): in the first few years, we barely had enough applicants, but last year, we received 70 people for interviews! In the wake of the #Metoo movement, equality issues are occupying more space in our minds and in our society. The profiles of the candidates are really varied: from elected officials, or people working in local authorities or public institutions, to those working in the social services and care sectors, in nonprofits, and in primary education, etc. The prerequisites to apply are: having a baccalaureate and 3 years of higher education and a professional project, and showing motivation.

Every year, the diploma program organizes a Summer Academy. Who, specifically, is it meant for? What is planned as this year’s theme?

The Summer Academy is an integral part of the overall program. It is the only moment where participants are asked to physically attend on-site. It lasts one week and includes an open-day. The theme changes each year, in line with current events. We invite researchers, actors from the nonprofit world, communities and institutions to participate in conferences, round-tables and cultural events. This year, we have chosen to focus on culture spaces. Why? Because, as the #Metoo context has demonstrated, cultural spaces are not immune to gender inequality and violence. The world of culture does indeed reproduce relationships of power, domination, glass ceilings, like all sectors, but we can have the illusion that gender inequalities are less present because it is a sector that is otherwise very feminized. But gender diversity is not equality!

The program of the Summer Academy is very dense, but it’s also meant to be a pleasant experience. The overall training is done remotely in order to meet the constraints of the trainees, but this moment of face-to-face exchange and interactivity allows for stimulation in learning and enriching social interactions. Moreover, the University takes care of the accommodation and meals of the participants thanks to our sponsors who have supported the program since the beginning: the Regional Council of Brittany and the Regional Direction for Women's Rights and Equality. This "Breton model of equality”, with a logic of partnership between the academic world, the communities, the politicians and the nonprofit world, is not found everywhere. In Brittany, there is a form of synergy, noteworthy in its approach and methods, and this course is proof of that.

MCF, Head of the Inter-University program on Gender Studies