Literature and dance, a tandem partnership at the Transversales 2021 festival

The multidisciplinary Transversales festival, a joyful pedagogical project involving students and teacher-researchers from Rennes 2, returns from November 19 to 27, 2021 for a lively edition dedicated to the links between literature and choreography. 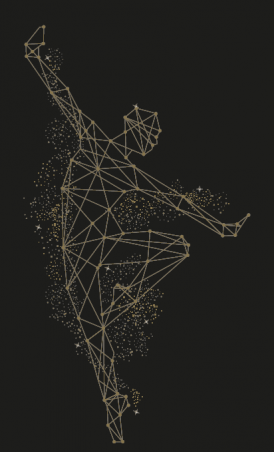 "We haven't had such a rich social life in a long time!" After almost two years of the Covid crisis, Malou Beziat and Célia Frankel, 2nd year master students in comparative literature, threw themselves with obvious enthusiasm into the organization of Transversales. The festival, which has been held every year without interruption since 2011, lives up to its name. In addition to addressing the bridges between literature and the arts - "our object of study in action!" - it "breaks the categories" of the university community by involving students and teacher-researchers on the same level in the construction of the event. Malou Beziat had the idea for the theme of this edition, dedicated to choreography and more broadly to the body in movement, and named "Trans'en danse".

Célia Frankel and Malou Beziat, 2nd year master students of general and comparative literature at Rennes 2 and co-presidents of the organization responsible for putting together Transversales, FTR2.

"The initial pedagogical project, initiated by Timothée Picard and Jean Cléder in the Literature Department, was to co-construct a festival using a horizontal form of organization", explains Gaëlle Debeaux, who is now the coordinator with Marianne Di Benedetto. "Concrete spaces to prepare the event were developed within the framework of the master's degree in general and comparative literature, mainly in the form of a course in the first semester of the degree program that introduces the chosen theme and allows students who wish to get involved to do so." Created in April 2020, the student organization Festival Transversales Rennes 2 (FTR2), has succeeded in giving "real decision-making power to students." Malou Beziat and Célia Frankel are the co-presidents but "everything is discussed collegially and then coordinated in small groups of 2-3 people". Volunteers from all fields of study - "not only literary or artistic! Everyone is welcome whether it be for organizing an event or just sticking up posters, proposing ideas or other things."

For the two students, this is a golden opportunity "to become familiar with our future professional world, whether it be research or cultural mediation." Indeed, Transversales relies on numerous partnerships, both internal and external, offering a first contact with the world of events and the network of cultural actors in Rennes, such as the Triangle, the Champs Libres or the cultural office of Rennes 2. Malou Beziat, who is in charge of the festival's study day, will also take part in the M1 seminar: "It's an opportunity I would never have had without it, and it's great on a CV when you're considering a doctoral or post-doctoral contract," she says. The work on Transversales can also be the subject of a VEE (Validation des engagements étudiant·e·s) to validate certain courses or to get bonus points on one's average.

Gaëlle Debeaux, lecturer in general and comparative literature, is the editor of this 11th edition of Transversales, whose graphic design is signed by Benoît Gaudin of the cultural service of Rennes 2.

During this 11th edition, don't miss:

After "Trans'en danse", from January 2022, the team will work on a 12th edition, with the idea of making the festival live throughout the year through other actions.

Find the full program and practical information on the Transversales website.