Steve J. Haines, Professor of Jazz at the University of North Carolina at Greensboro (UNCG), will be holding lectures, participating in conferences and giving concerts during his month-long stay in March. The visit, organized in partnership with the Conservatoire de Rennes and the Festival Jazz à l'Etage, will begin with a kick-off concert at the Tambour on March 5! 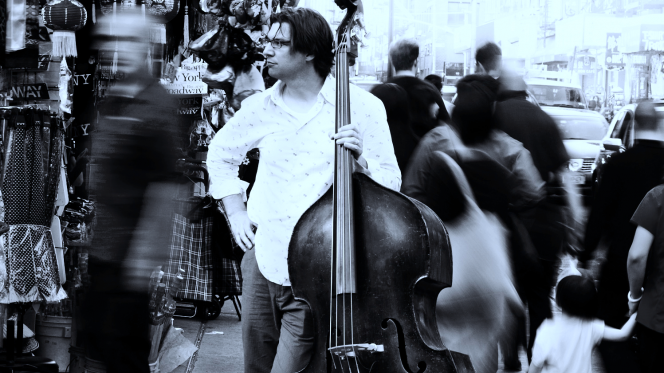 His first album as a leader, The Steve Haines Quintet: Beginner's Mind (2003) received international critical acclaim and was hailed as “one of the best inside/outside records of the year.” He has also released three more albums as a leader: The Steve Haines Quintet with Jimmy Cobb: Stickadiboom (2009), Secret Stash (2017), and the recent Steve Haines and the Third Floor Orchestra (2019). He also orchestrated and arranged the musical Ella: The Life and Music of Ella Fitzgerald.

"My discipline as a musician encompasses many passions,” says Steve Haines, “including my work as a double bassist, composer, arranger, teacher, and most important of all, student.”

He is also the director of UNCG’s Miles Davis Jazz Studies Program, a position he has held for 20 years, as well as being the recipient of a 2019–20 North Carolina Jazz Fellowship and a finalist for the 2010 Jazz Knights Commission.

In addition to the events taking place on Rennes 2's Villejean Campus, he will also be playing at various musical venues in and around Rennes. A full list of events in which he will be participating is available below.

Steve Haines will be accompanied by 3 other jazz teachers from UNCG for a series of concerts in Brittany (Brest, Rennes, Saint-Brieuc, Granville) organized by Rennes 2 Faculty Erwan Boivent and Emmanuel Parent. Don't miss the kick-off concert on Thursday, March 5 on the Villejean campus.

* Following the government's announcements on the COVID-19 situation, Rennes 2 University has decided to take new precautions. As of Monday, 16 March, all events planned by the university will be canceled.

Jazz Analysis, The Majesty of Billy Strayhorn and Duke Ellington

Billy Strayhorn and Duke Ellington were master orchestrators. We will look at examples from their brilliant, highly swinging and endearing arrangements and orchestrations of Pyotr Tchaikovsky’s “Nutcracker Suite” from 1960. We may not be able to enjoy the Russian vodka and dancing that Billy experienced as he wrote this distinguished work, but we can live vicariously through the music. Additionally, we will bring context to this work by reviewing the typical arranging styles that came before.

Jazz Listening, The Importance of Listening

Friends, Romans, countrymen, lend me your ears! Through the lens of music, we will discuss what it means to listen. We can’t allow secondary sources to distract us; we must learn directly from the music, our primary source. These sessions will teach you the what, how, and why of listening, and will offer fun, practical interactive examples. These lectures are designed for students, performers, arrangers, composers, and teachers.

Why does jazz these days sound so bad? Why is it difficult to feel this music, or to hear melodies and pulse? Jazz has lost its sense of individuality. In this session, we will discuss the roots of Black American Music, and its dreadful treatment in music schools.

* Please note that, for the most part, these lectures will be held in English.