Rennes 2 President Christine Rivalan Guégo last week presented famed artist Martha Rosler with the title of Docteur Honoris Causa at a ceremony dedicated to her contributions in the fields of critical conceptual art, writing and teaching. 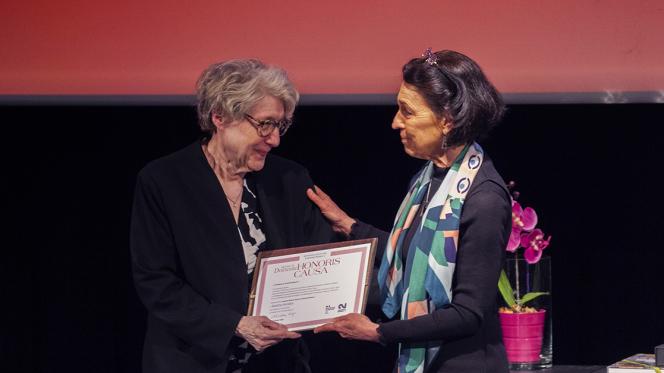 On March 25th, 2022 the esteemed American artist Martha Rosler became the latest distinguished person to be added to the list of honorary doctoral awardees of Rennes 2 University. The event, held in the Tambour amphitheater, was hosted by the University President Christine Rivalan Guégo and Rennes 2 Professor of Contemporary Art History Elvan Zabunyan.

During the opening speech of the ceremony, Ms. Rivalan Guégo said to Ms. Rosler, “I would like to tell you, on behalf of our community, how proud we are to be able to count you among us. Your work has been developed by summoning and questioning several media of representation: photography, photomontage, performance, writing and video, you who always associated this work with a clear critical production, you who have also always combined creation and militancy. With your proposals on the representations of women or with those on wars, you have come to shake up our ways of thinking by injecting the incongruous and the unexpected”.

Indeed, a major figure in American contemporary art, Ms. Rosler has produced since the mid-1960s, a distinctive body of work that uses several mediums of representation together. Photomontage, photography, performance, video and writing are forms of expression that allow her to create radical artistic responses to the cultural, economic, political and social contexts of her time.

Her pedagogical sensitivity also led her to carry out collaborative projects with many students in various American and European institutions. Ms. Rosler taught for several decades at Rutgers University in New Brunswick, New Jersey, and then at the Städelschule in Frankfurt.

In 2005-2006, Ms. Rosler carried on this tradition at Rennes 2 when she took part in the realization of a new exhibition at the Galerie Art & Essai in the framework of the Master's degree "Métiers et arts de l'exposition" and the publication by the Presses universitaires de Rennes of the first (and still unique) monograph of the artist in French entitled Sur/Sous le pavé (2006). A monumental work of 512 pages, it still influences the writings of academics and students engaged in research on Martha Rosler.

This experience and the exchanges that followed facilitated greater collaborative work  between the departments of art history and visual arts of the Villejean campus. An international symposium was also organized in 2006 around feminist issues, where Martha Rosler presented her work, creating bridges with the other invited speakers.

It is during this period that Ms. Rosler began a series of collaborations with Rennes 2 Professor of Art History Elvan Zabunyan. Taking the stage at the ceremony, Ms. Zabunyan spoke on how much her works have influenced herself and other students of conceptual art. “Her contributions to the way we see and think about: art and politics, art and society, art and history, and more, continue to be an inspiration to us all. The ability to confront conditions of exclusion and injustice through art is what has made her work a reference for the world of art, and so much more in our society.”

Before beginning her speech to the audience, Ms. Rosler took out a small hand-held camera and, in true form, took a picture of the same audience who was there to honor her. “I am deeply honored to be standing here and proud to accept this degree from Rennes 2, for which I have a sentimental bond.” She then spoke of the role of art as a social endeavor, which can serve to help communities around the world, and its role in serving an educational function, as well as its political function.