“Phrase and Rephrase: bis repetita?” – A conversation with the symposium organizers

The 35th international symposium of the CerLiCO (Linguistic Circle of the Center and the West): "Phrase and Rephrase: bis repitita?" will take place at Rennes 2 University on May 20, 2022 and May 21, 2022, in Villejean Campus. 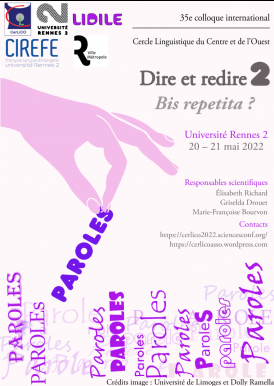 During this event, participants will discuss how to examine repetition in rephrasing from a linguistic, translational and didactic point of view, the parameters to take into account and variability in the field. It will be followed by a publication backed by the Presses Universitaires de Rennes.

We spoke with teacher-researchers and organizers of the event: Griselda Drouet, Elisabeth Richard and Marie-Françoise Bourvon, members of the LIDILE research team, about the specific topics to be discussed. Read on below to find out more.

Why focus on the process of rephrasing in language and discourse?

The LIDILE research center (Linguistics, Engineering, Language Teaching) will be using this opportunity to promote and reinforce three priority research axes during this event:

Rephrasing: is it an act of repeating or reformulating?

All acts of linguistic expression are likely to be restated, identically or not, modulated, transformed, improved, or even contradicted, whether by the speaker himself or by a third party. These various operations require speakers to set up an act of reformulation which, although based on an existing act of enunciation, is characterized by its uniqueness and singularity. Indeed, repeating and reformulating participate in an act of co-enunciation, making the acts of production and reception two joint activities. They can take the form of a paraphrase, a more or less strict repetition or a rectification, allowing the speaker to make readjustments, either in anticipation or in response to a reaction from the interlocutor. It is thus a question of updating the "already-said" into a “better-said” (Le Bot, Schuwer et Richard, 2008a : 11), or at least in a “differently-said”.

If the 34th symposium of the CerLiCO, organized by the CeReS (Center for Semiotic Research) at Limoges University in 2021 focused on rephrasing as a starting point, this 35th symposium will continue examining this topic and also consider more precisely the variety of repetition markers and the issues related to the choice of linguistic constituents and/or their linear ordering.

How will the notion of rephrasing be considered under the three axes mentioned above?

From the point of view of linguistic studies, a focus will be put on delineating the written and oral forms, and the inclusion of these forms in the discourse. At what point do we consider that there is a repetition? Do we say the same thing, do we progress in the discourse and if so how, and how do we say that we are going to repeat ourselves? We will also study how the oral is represented in literary corpora. How to annotate the reformulation? According to the types of enunciators in the interaction, the types of discourse, the types of text? What are the identifiable patterns of repetition and reformulation? And, from the point of view of computer detection and human/machine learning, what are the methods of detection and automatic distinction between repeating and reformulating?

In terms of translation and interpretation, if translation inevitably consists in reformulating something different, it also calls for a reflection on what must be said, added, explained, may not be repeated, or even must not be repeated, because of the repetition that occurs between different languages and cultures.

This conference will also present the different didactic problems linked to the processes, forms, and strategies of phrasing and rephrasing from the point of view of both the learner and the teacher. Between artifice and reality of language learning, can re-telling be considered as an efficient teaching/learning strategy? In the multiplicity of forms of repetition, how can we take into consideration the teaching/learning context, the level of the learners, the type of tasks and the constraints of the instructions?

How are language, discourse, but also translation, technical writing, and the teaching context enriched by repetition?

Peppered with constant repetitions, the language searches for itself, and the discourse supports itself by rephrasing itself. From a linguistic perspective, we will observe how repetition formulates and reformulates, rephrases, takes up again and thus weaves its coherence and its cohesion. From a phonetic and phonological point of view, we will be interested in the variations that change the interpretation: from interrogation to pastiche, from sarcasm to anger and through mockery for example. Studies can also be conducted around the argumentative or pragmatic aims that language offers to take up and signify the same thing or something else. The different functions of repetition in the linearity of discourse, and the difference between self-rephrasing and hetero-rephrasing will be examined.

On the translation side, we can question the thresholds of acceptability that the notions of phrasing and rephrasing generate according to the languages and cultures of work, the types of text, and their purpose. In this respect, work in corpus translatology is particularly relevant for identifying trends, for example between translated and untranslated texts of the same language, which may point to the existence of translation universals, or contrasts between source and target languages. The famous translator's note is not found in the subtitling done by audiovisual translation professionals, whereas it is seen in so-called "fan-subbing" subtitling. Repetitions may be more acceptable in some languages than in others. Papers will also address the area of revision, based on both human and machine translations. Do translation and writing tools constitute a hindrance or a support? Do they impose terminological standardization or do they allow the translator to leave their mark?

Finally, the general theme of the conference calls for a questioning of the work of the interpreter, physically present at the moment of enunciation, and for an analysis of how their reformulation differs from that of the translator.

On the didactic and pedagogical sides, the teacher's rephrasings have the function of structuring knowledge in class. The teacher has to rephrase their own words as well as the learners' answers. But isn't the rephrasing, of the instruction for example, preceded by an identical repetition of the first statement? Doesn't the rephrasing of the learner's words begin with a repetition of their answer? We could be interested in the co-presence, the succession of these two moments, repetition and rephrasing, in foreign language lessons. We can ask ourselves how written and oral mediation activities can concretely engage learners (and teachers) not to systematically consider repetition as an error to be tracked down but as part of the "mediation strategies" to be developed.

This event aims to bring together members of the scientific community, linguistic specialists and especially specialists in oral language (for French but also for other languages, Romance or not) in order to shed different light on all these questions and to fuel rich and varied exchanges on the notion of repetition.

À voir aussi
Find out more about the event
END_OF_DOCUMENT_TOKEN_TO_BE_REPLACED